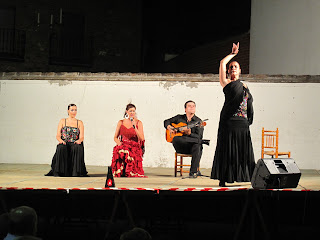 My first post about the annual San Gil fiestas in Torrico was crying out for a second part. Many people asked how the fiestas were in 2009.

For the most part, things were tranquil. There is always excess, but improvements have been made -- most noteably, I bought ear plugs.

There was lots of music: flamenco to warm up, traditional Spanish songs for the older crowd that turn in at 2:00 am and popular dance music for younger ones. Techno started at about 6:00 am, but I was already sleeping -- thanks to my ear plugs! 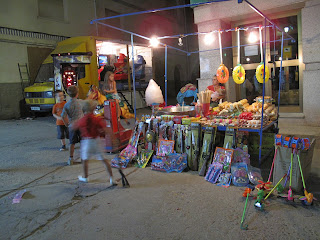 This years festivities were special for the family because there was a 50th wedding anniverssary. After a short ceremony in the village church we went off to have appetizers in the garage (much nicer than it sounds). There were kilos of Spanish ham, cold cuts, chorizo, chips, olives, cheese and local sweets: Roscos (small dense donuts) and Floretas (Large flakey flower shaped sweets, dripping in honey. This was to warm up the belly. 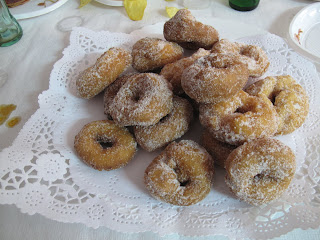 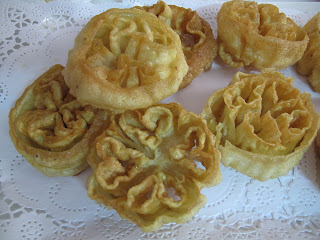 At three in the afternoon we assembled in a posh wedding banquet restaurant for the 12 course meal. I personally think that eleven courses is the limit, but excess is the name of the game.

After lunch, we rolled on home for a long siesta to rest up for dinner and the evening events.

Before the music, there were flowers for the many couples completing their 50th wedding anniversary and the crowning of the Torrico Beauty Queen. 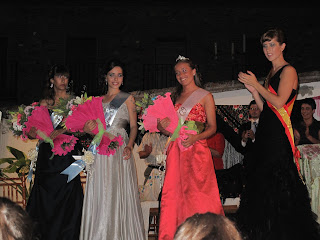 The weekend was topped off by a village wide BBQ. There was free food and drinks for everyone. By food I mean fatty meats...the more fat the better. 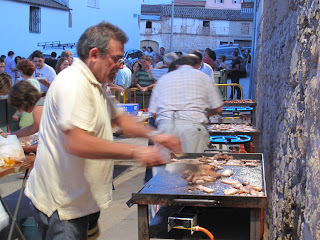 Next year, repeat... but don't forget the earplugs. 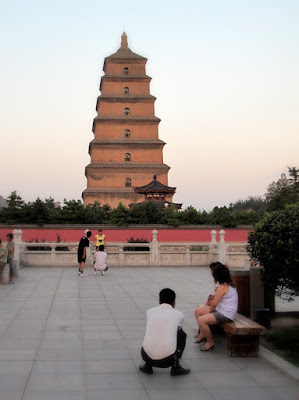 Dear citizens of the world,
This post is about one of those cultural tidbits. Countries are beginning to look similar with the same shops (Walmart), cafes (Starbucks), fast food joints (McDonalds). However, there are still many things that can differenciate cultures or even shock while traveling.
My travel companion was astounded to see so many people squatting in China. Chinese people squat to rest, read a newspaper, talk on mobile phones, take pictures, and to use the WC but Westerners only associate squatting with bowl movements.
Researching the topic I found another post on squatting with a link to a page with the benefits of squatting. A fellow United Statesian posted (a technical) "Seven reasons to squat."
I have to admit that I am not so good at squating (lack of practice); however, it is an important skill for travelers. Lack of knowledge can even lead to injury!
My "squat story" happened on my recent trip to China. We were with a tour group on our way to the sacred mountain of Hua Shan. The minibus stopped and we had very little time to do our business. The facilities were a semi-closed concrete block with three porcelain holes -- no privacy. I went into full squat, did my best to not fall in the hole while ... , but when I got up again I realized that I had re-injured my thigh (an old cycling injury).
A trip to a sacred mountain of more then 2000 meters (with dizzyingly high cliffs) and my injury comes from squating in a public toilet... go figure. Before traveling, I should have read these instructions on how to use a squat toilet...
The next day in Xian, I saw a man in a toilet (no walls) who was squating, smoking and reading the newspaper... now that's talent!
The United Statesian
PS Got a squat story? Post a comment by clicking on the link just below...
Publicado por D. Troy Roach en 8:54 PM No comments: 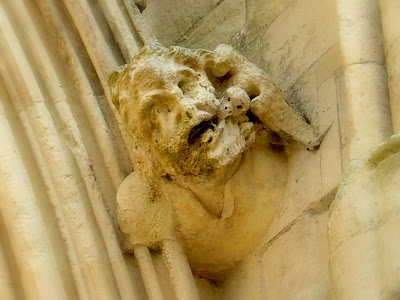 Dear citizens of the world,
Yes, the Demon Dogs have attacked! and they are winning.
The return to normal has been rude. Hours before my return, I came down with a serious sore throat. I have lost my voice in 24 hours; only able to communicate by blog.
The sad part is, the kids won't even be back for a week! I don't have a good reason to be sick!
I thought is was psychological at first (post-vacation syndrome), but my tongue has a yellow-green blanket and my throat is red and swollen.
C'est la vie,
The United Statesian
PS This Demon Dog is actually a bird, but I am sure that you get the picture and we can stick with the lovely theme of Demon Dogs, without confusing things with Demon Birds which does not sound scary enough...
Publicado por D. Troy Roach en 8:41 PM No comments: