Showing posts from April, 2010
Show all

"Fires in Valencia" -- The funny side 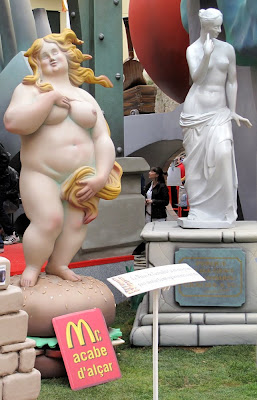 Classic vs Modern "McCulture diet " Dear Citizens of the world, In my last post on the fallas of Valencia I talked about the prettier and noisier side of the Fallas Festival. This post is about the satyr and parody that most of the Fallas sculptures do so well. Many are like seeing a 3-D newspaper caricature. Obama was one of the more popular topics. One big difference would be that there is no censorship and there is a lot more nudity and crude racial stereotypes that you would not see in a United Statesian version. Super Obama! ... watch that hand... Critique on the USA, but with a large Coca-cola advert behind it... Caricature on recycling... the first one on the left is recycling silicon ;-) Caricature of a Spanish politician.. . O ne of my favourite...gotta love his smile What's he looking for?... Ahhh... the key ;- ) One of the cruder ones...Usain Bolt? Local traditional clothes -- mothers and their dolls... Hope to see you again soon! The U
Read more

"Burning the artwork" - Fallas in Valencia 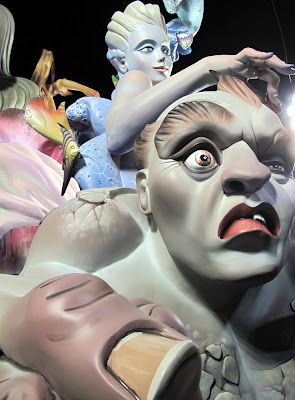 Dear citizens of the world! Fire seems to play a central role in many festivals in Spain -- noise is a given. The Fallas (pronounced FAIyas) of Valencia is a Spring celebration in late March where more than 400 pieces of art (Fallas) are created in the plazas and streets. On the last night, all are burned at midnight; all except the best one which gets a pardon and goes off to a museum. This was my first year going to the festival. We had all afternoon to walk around and look at some of the main "fallas" before watching one burn at midnight. A detail of Charlie... One of the top Fallas statues... hard to believe it is paper... While all this is going on, there is an incredible amount of noise. There are thousands of people -- mostly young children -- setting off loud firecrackers. A terrorist attack could happen just down the street and nobody would notice. I jumped out of my skin more than once. A small kid being "indoctrinated" into the world of BOOM !
Read more
More posts