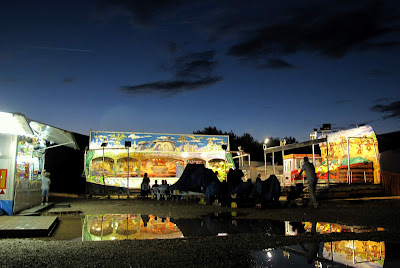 The calm after the storm
Dear Citizens of the World!
Marina D'Or "Vacation City" is now officially (Rain city). After a week of August rains, a huge thunderstorm rocked the city, flooding streets in seconds. 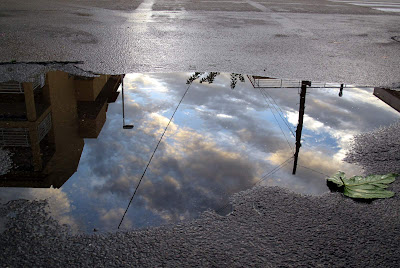 This reflection is from the day after...
The day started with rain and dark clouds. The afternoon started looking better, but then I heard the screems...
I ran out to our 9th floor terrace which has a good view of the surrounding area. The storm was moving North at such a speed that birds running for cover were blown away. The rain and extreme winds only took a few seconds to cover the mile (1.5km) distance from Marina D'Or Hotel/Spa. 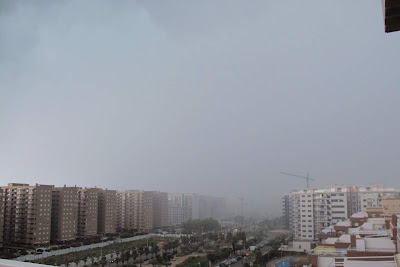 The incredible speed of the storm scared the tourists, caught off guard
I leave you with a parting shot from this morning. The sun and heat is back to the beach...for now... 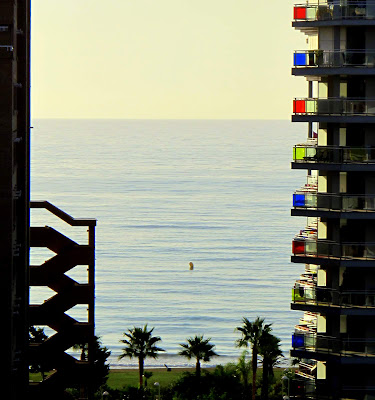 Weird story -- the ringing rock in the mountains 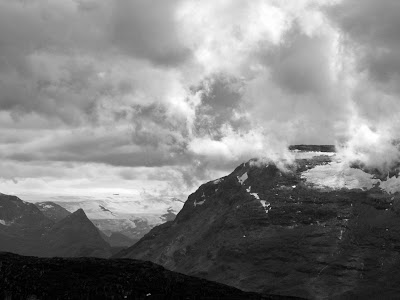 View of Jostalbreen Glacier from Gryta on a cloudy day
Dear Citizens of the world!
There are a fare share of odd "coincidence stories" in my travels, but this coincidence was just plain weird!
We were nearing the end of our trip in Norway and decided to do a hike to a peak behind Stryn. There are great views of the surrounding lakes, mountains and glaciers, but it is not on the tourist route, thus it was deserted.
We were enjoying the fact that we had the mountian to ourselves and we were about half-way up the climb to the peak when we heard a mobile phone ringing. We could see for kilometers in every direction and nobody was around. We started to search for the source of the sounds when they sudenly stopped. After a few moments the ringing continued and we found the mobile phone under a boulder! 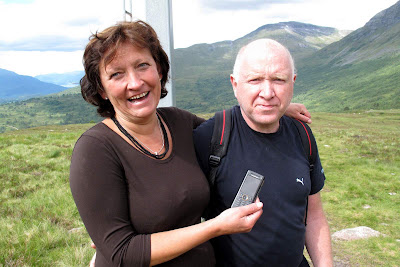 Happy to retrieve their mobile that was lost on the side of "Gryta" mountain.
We called the last number in the phone and talked to the owner who had lost the phone the day before. They were at the peak, looking for the phone. We continued our hike up and met them on the way to return their phone to them. We then continued our hike to the peak and back down without seeing anyone else that day. What are the chances of that happening? 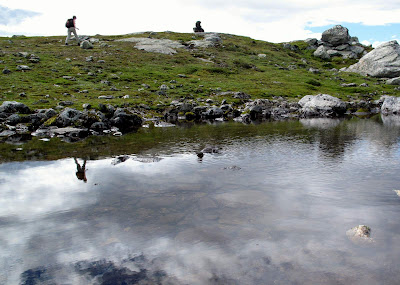 A reflection in a pond near Gryta Peak
I leave you with a parting shot of the traditional, environmentally-friendly homes in Norway. 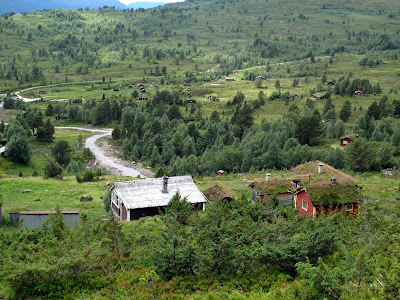 Searching for the light -- getting away from kitch 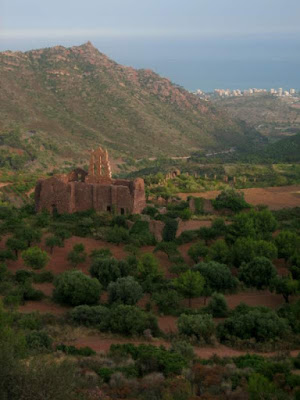 Sunset over desierto de las Palmas and Benicassim,
with the unique pinkish red of the local stone
Dear Citizens of the World!
My motivation for this month will in part be to search for the light that makes the Mediterranean so special. I had almost forgotten about it because it is either raining or too hot to venture out.
Today's ride was hampered by a summer storm. Luckily, I was able to watch it from nearby. The picure below shows the rain over part of the sea. A nice tone of pinkish-orange contrasts well with the dark-gray clouds. Just to the right, the sky was blue! 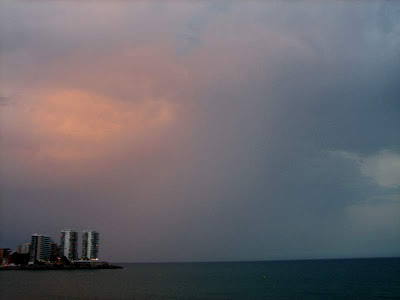 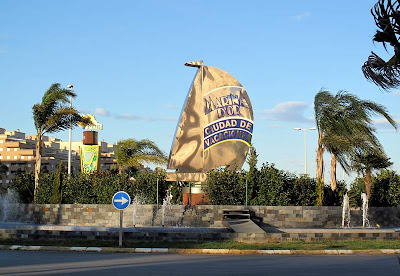 Dear Citizens of the World!
I write to you from the "kitch paradise" of the Mediterranean. Marina D'Or, Vacation City, is located on the Spanish Mediterranean coast, about an hour North of Valencia.
Since Kings Day 2010, I have been coming here on weekends...and now the summer. My luck has not been good because it rained every weekend I came for the first six months. There was a bit of rain last night and there is a thunderstorm as I write this, but in general it is hot, humid, sunny and sweaty all summer long. 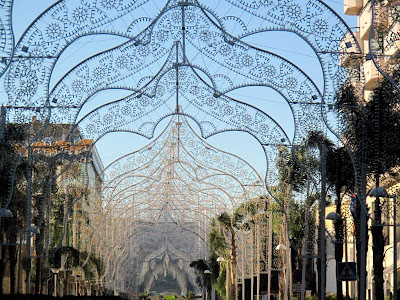 The main street lights up at night...Spanish Vegas, but without casinos?
Marina D'Or has been designed to attract blue-collar families that dream of spending time at the beach, but feel like they are in need to be surrounded by a cheap version of Las Vegas. OK, maybe I am being a bit harsh, yet it does not feel like the Mediterranean coast of great artists like Soralla and Cezanne.
The good part is that fact that I can easily jump on my bike and see lesser trampled parts of the coast, leaving the lights behind.

Panoramic shot from the mobile phone along the Via Verde (Oropesa-Benicassim)
This panoramic shot taken (with my mobile phone) of the ruins of a tower along the coast is a bit more of what I had in mind when thinking about the Med; it's only a few kilometers away on bike trail that goes towards Benicassim.
Stay cool.
The United Statesian
Publicado por D. Troy Roach en 4:50 PM No comments:

Jumpshot I -- The return to normal 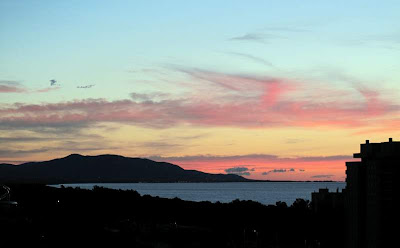 Sunrise in Marina D'or --"Vacation City"
Dear Citizens of the World!
Somehow I have landed on the beach of the Spanish Mediterranean coast for the month of August. It is the dream of many to spend their summer on the coast, but I have never aimed to spend much time baking under the sun.
However, even though it is tough for me, I have been trying to get used to spending a month at the beach. I am happy to report that there other people here -- a lot of others. One of these days I will have to go down and get some pictures. Yesterday, we sat on the beach for an hour, without being able to actually sea the Med through the mass of people and umbrellas.
I leave you with a parting shot of starting my summer vacation in Torrico (el pueblo). It is geographically the furthest spot from the beach as you can get in Spain, but the cousin has a pool with a great view.
The first of many "jumpshots" to come in the future: 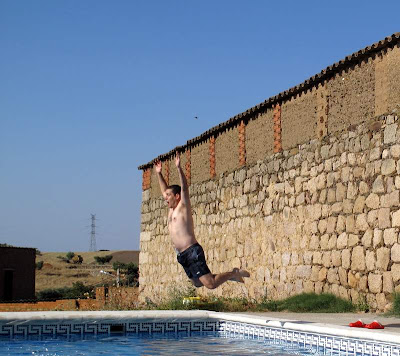