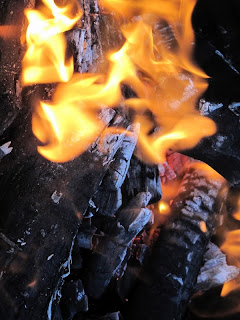 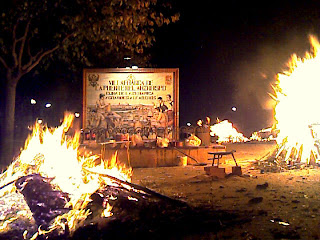 Although it might come as a shock, my Pueblo is not the only pueblo in Spain. Just five kilometers away there is a village called "El Puente del Arzobispo" (The Archbishop's Bridge - An Archbishop that owned the neighboring village ordered a bridge built over the Tajo River to make the pilgrimage to Guadalupe easier and safer.) 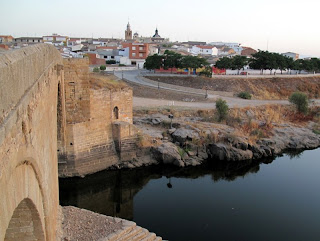 On the 25th Novermber the village celebrates the "Chozas" festival to honor Santa Catalina. The bonfires are built in the middle of the roads all around the village. When the fire burns down the embers are used to BBQ meats (some call the meat juicy, others might call it fatty, yet others just call them tasty).
How did the festival start? The origins are not clear, but most likely, people waiting to cross the river (pre-bridge times) often had to camp out and they would make big bonfires while waiting for dawn when they could forge the river. 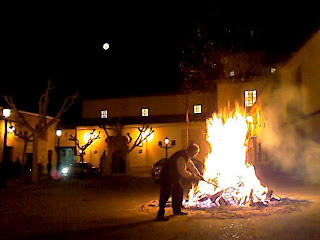 Here I offer you some pics from the festival... unfortunately I did not have my camera and I had to catch the happenings the best I could with my mobile phone.
Another day we can talk about the ceramic art which makes the village famous.
The United Statesian
Publicado por D. Troy Roach en 9:00 PM No comments:

All Saints day is the Spanish tradition that precedes the Halloween invasion from the West.

November 1st is traditionaly the day that families remember the departed by visiting cemeteries to clean the tombs and leave flowers. The pueblo of Torrico is no different. 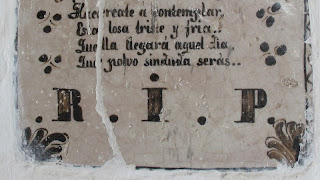 This tile is from the first person buried in the village cemetery. It loosely translates as:

"Stop and contemplate,
This tile, sad and cold,
Which will one day arrive,
Without a doubt in dust you will be."

There were a few children dressed up for Halloween and looking for treats, but there were many more visiting the cemetary and the grounds were full of fresh (and plastic) flowers.

I do not know what the future holds for Spain, but I hope that the "Party" version of the holiday does not come to replace the Spanish tradition of remembering their dead. 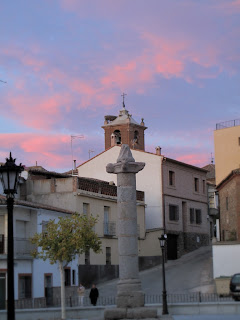 A parting shot from the center of Torrico with the sunset on All Saints Day the Church with its' Crane's nests and the Plaza España and its' oddly named "Justice Roll." 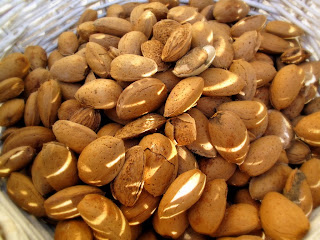 Almond harvest time has come and gone. We spent a couple days in the pueblo, collecting almonds. It is hard work, but I like it -- well, once a year. 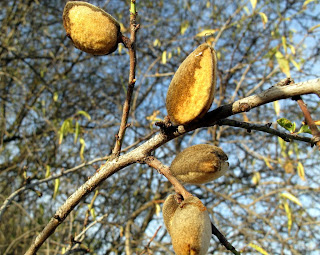 This is a photo of the almonds while they are still on the tree with both the outer soft shell and the inner hard shell (as seen in the first picture above).

Why is collecting them fun? The process starts by laying large nets under the tree, then I get to use a long stick to whack the tree until it gives up all its' almonds. End of fun part...
Then the outer shells have to be taken off (sometimes not so easy). There is then a drying-out period and the last leg is to break the hard inner shell to get the "almond meat" out... careful to not crush the almond in the process.
Eat and enjoy all year long. The harvest this year has been bad because there was not enough rain. Many almonds are "fruitless." And a violent downpoor at the end of the season stripped some trees of the fruit just before harvest time - as well as killing one of the locals.

Now we have to prepare to use the almonds to make Mazapan - the traditional Christmas sweet from Toledo, Spain. 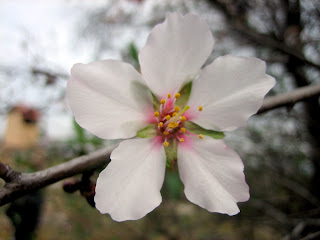 A shot of the almond tree in bloom this spring. 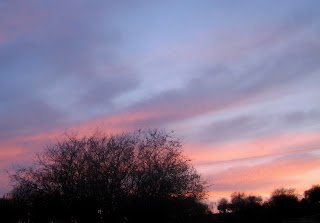 I leave you with this parting shot of the sunset over the almond trees in the pueblo after a long, hard day in the fields. 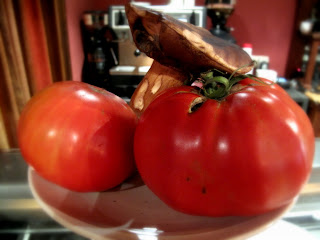 Fresh tomatoes and Mushrooms the size of a baby's head!
.....................
Dear citizens of the world,
Wine is definitely important in the Rioja region... and the pilgrimage. But it is only part of the balanced diet. Food from this part of Spain is important as well.
We were lucky to see the end of the wine harvest (see last blog), but it was also mushroom season. The hills and forests are infested with mushroom pickers. I don't collect shrooms since I can't tell a delicious boletus edulis from a poisonous Boletus reticulatus! I just enjoy eating them, especially when they are sauteed with olive oil and garlic. Yummy! 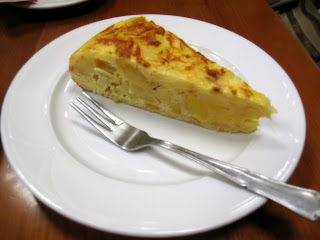 We did have some Spanish Tortilla - probably the most common cooked dish that you can find all around Spain, but we did try many other local delights: 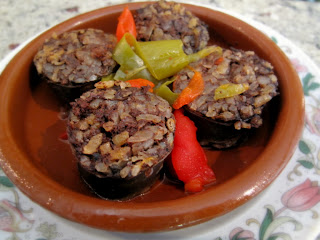 I highly recomend the blood sausage. The variation from Burgos is made with rice. This specific dish lasted just long enough for me to get a picture of it before being devoured.

The "Peppers" garnish is a signature element in Riojana cooking. Many dishes in Spain are "A la Riojana" which often means that there will be a sauce with bell peppers.

The second morning, at sunrise, we found a woman in the village grilling red peppers. She was making huge quantities...by Spanish standards it was probably just enough to compliment lunch for a small familly ;-) 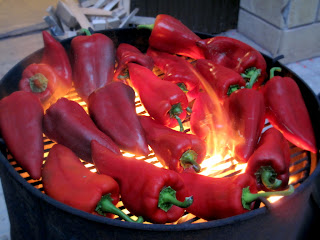 Grilling red bell peppers - a key element in Rioja cooking. Of course, we had a good excuse to eat so much. We walked 50km in two days, with our houses on our backs. We still have three days of Camino left in the Rioja region... I am looking forward to it... especially after seeing the pictures of the food and wine again... 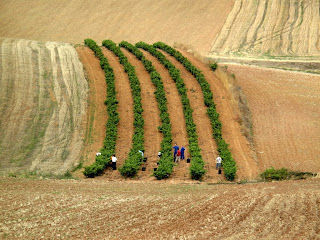