Package from Japan -- via Norway with gifts 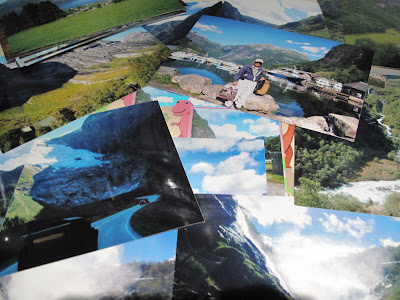 Dear citizens of the world!
The tumultuous events of the past month have kept me away from my blog. Most notably, the earthquake in Japan kept me glued to the screens.
Seeing the videos and hearing people's accounts of the quake brought back memories of the 7.6 earthquake I experienced in Taiwan; the feeling of fear that comes from "surfing" a strong earthquake that suddenly grows violent, the 30 seconds that turn into weeks and months, the stories of people surviving after eight days....
What most don't realize is that the tremors continue for weeks and months. After three months of motions sickness from 3,000 aftershocks I was happy to "get off of" Taiwan and onto solid ground.
Naturally, the Japanese quake lead me to think of my summer vacation in Norway.
What? You say.
I don't have any close friends in Japan, but I immediately thought of this very nice, retired Japanese man I met in Flom, Norway. He only spoke Japanese, not a word of English and he was travelling alone. 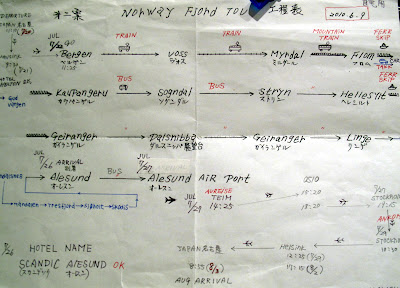 Takahashi's route in Japanese and Norwegian
He had this paper with the names of the places he planned to go and pointed to indicate that he wanted to know what time the next bus was to the neighboring village. A couple of tourists were trying to explain (for quite a while) that he would have to wait an hour for the next bus.
I was going to the same place by car (15 minute ride) and offered to drive him. He was very happy and offered money, but I refused. Upon arriving in the village he heaped gifts on me, thanked me profusely and we exchanged contact info. 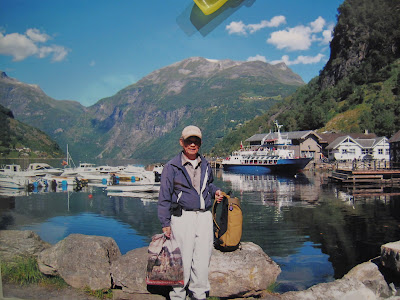 Takahashi with all of his luggage!
With the help of google translate we were able to exchange a couple of short emails.
However, a couple months later I received a large package in the mail with gifts (very good Japanese pens), lots of pictures of Norway and the letter below. Unfortunately, I don't read Japanese and it is not digital text so I can't translate it. Anyone who reads Japanese? I would love to hear what is says. 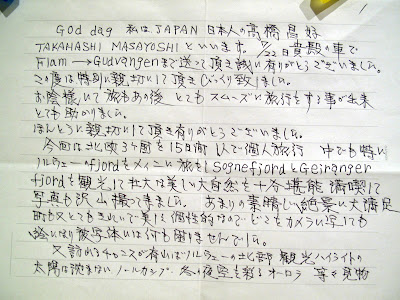 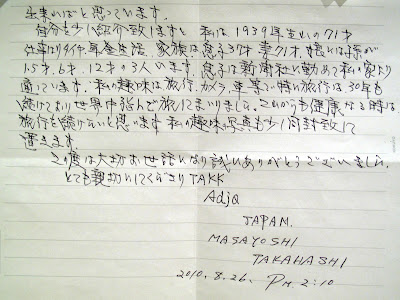 The two page letter that I can not read...
Luckily, Takahashi lives in Southern Japan and he is not affected directly be this earthquake or the aftermath.
Hopefully I will be able to visit Japan one day. Who knows... maybe a Norwegian will give me a ride to the next town.
- The United Statesian
Publicado por D. Troy Roach en 1:39 PM 5 comments:

Eating my way through Spain --Part II -- Segovia to Valencia 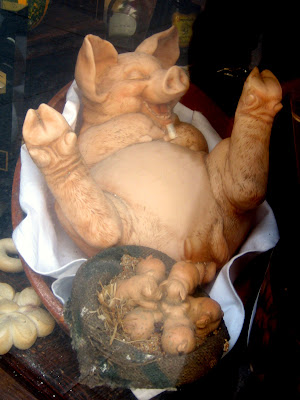 Suckling pig... crispy, but not dry
Dear Citizens of the world!
In one of my last posts -- Eating my way through Spain -- I mentioned the fact that Spanish tourism is centred around food. Segovia is no different.
The "task" of visiting monuments, sights and museums is purely a way to work up an appetite. 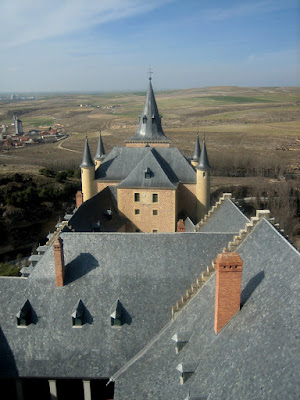 Visiting the Disney-like castle...working up an appetite!
In Segovia, people most often walk around the centre, check out the aqueduct and tour the castle that locals claim to be the source of inspiration for Disneyland's logo.
Then, if you have walked around enough (stopping to sample local delicacies between each monument), you can sit down, unbutton the trousers and dig in. 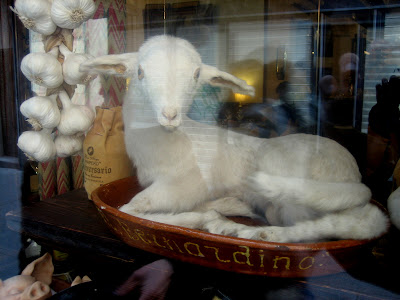 I'm already in the pan and ready to go!
Don't worry if you don't speak Spanish...most restaurants decorate their windows with cute versions of your meal...
De aproveche!
- The United Statesian
PS Next week... Fallas I (Fallas II) in Valencia. A good reason to eat Paella!
Publicado por D. Troy Roach en 11:46 AM 5 comments: 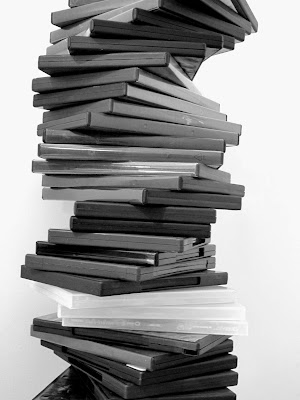 DVD empties
Dear Citizens of the World!
Space is a key word for expats. The more things you have, the harder it is to move from home, to home... to home (see past post).
Many expats start their lives in new homes with a suitcase or two. As time goes on, "things" accumulate.
After living in Madrid for more than three years ,"things" have been accumulating and ruining the Zen feeling at home. Today, I have started to tackle that problem by stripping the many DVDs to store the meter-high contents in a shoebox.
Ahhh! That feels much better...next, those boxes of random "junk"... to get closer to Zen.
Have a nice week,
- The United Statesian
Publicado por D. Troy Roach en 3:15 PM No comments: