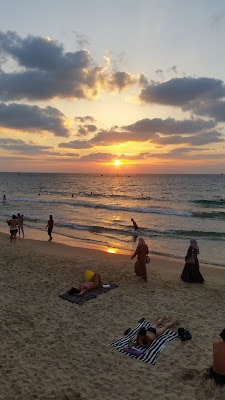 Beach on the border between Jaffo and Tel-Aviv.
Muslim Women co-existing with Jewish women
in Bikini on the beach in summer.


Dear citizens of the world,

The past couple of weeks here in Israel have been stressful but not as bad as it is shown on the media:

First of all, the stabbing attacks have been in and around Jerusalem mostly. Secondly, most of the targets are police, military and Orthodox Jews. Living in Tel-Aviv means being in a bubble and immune to the crazy side; however is does not make you immune from the stress.

Life goes on but you second guess each choice to go out, you are more aware of your surroundings, any young Israeli Arabs are watched as if they could make you the next headline.  Plans for a Friday dinner in Jerusalem have been put off indefinitely and the last hike in the mountains near the city was cancelled as well.

All in all, these flare-ups of confrontation between Bibi and the Palestinians is not what worry me. The threat comes from the lack of a long-term plan to resolve the issues and work towards peace. There does not even appear to be hope of peace. Even worse is the feeling that things will get worse before they get better.

Short term: I am sure that the attacks will slowly become more organized, more deadly and more explosive. Random knife attacks will morph into bombings similar to past intifadas... thus fueling a larger cycle of reprisals that could spiral out of control. (Note: The day after writing this post Hamas has called for bombings "Hamas media outlets have started to call for the replacement of stabbing attacks with vehicular terror attacks." ynetnews)

Long term: The indoctrination of young people on both sides of the dispute means that we are doomed to see fighting continue for a long time. True lasting peace will only come when both sides (especially the extreme 10%) educate their children differently.

Both sides are guilty of indoctrinating the next generation, but in different ways. This video I took in the Damascus Gate in Jerusalem in August (2015) is a good example. 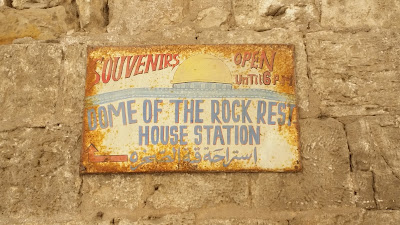 The current unrest is supposedly connected to the fear that the status quo will change on the temple mount. However, tourist visits are limited to only a couple hours a day and many days the access is closed. Security, controlled by Israelis, is very, very tight. The actual day-to-day activities are controlled by Muslims. And, even though it is the number-one holy place for Jews, the Orthodox Jews are not usually allowed to visit. And if they do, there is usually only one or two and they are flanked by a huge team of police and security guards that make sure there are no incidents caused by the Jewish visitor.

Seeing in person the measures the Israeli authorities take to avoid conflict, I doubt that they would risk taking actions that would lead to war. 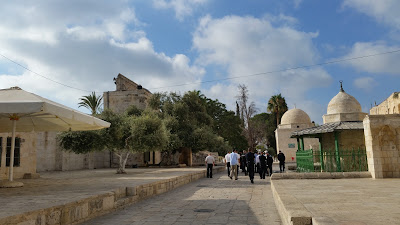 Jews visiting the temple mount, surrounded by security forces to avoid any conflicts. 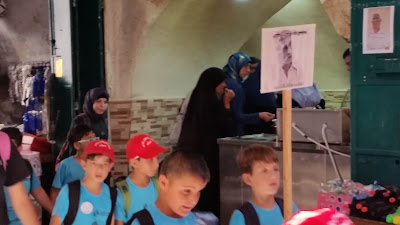 Teaching the future...to love or to hate?


This conflict is so complex that anything written could go on forever, but the goal is to find one part of the problem and work on that.

Deeply held beliefs that have been ingrained for many, many generations, will not go away just because you teach the truth. I believe they are both very sincere in their beliefs just as woman in plural marriages believe their life style is righteous. There has to be a change in their hearts and teaching can play a part in that, but it is really only God that can make that happen, and our prayers can be a part in that happening.