Quintos - Weighed, Measured and found to be drunk! 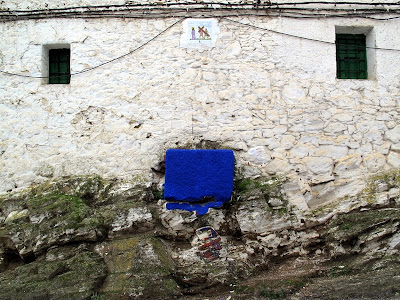 Los Quintos of 2010 getting ready for the changeover by painting designated surfaces
Dear citizens of the world,
Although it might not seem like it, we are living in times of relative peace. European nations such as Spain and France gave up manditory military service at the end of the 20th century.
However, traditions in Spain die hard.
Los Quintos are the people who are turning 18 over the coming year. In the past, they would be weighed and measured in the city hall for their military service. Those found to be too short or too fat might be pardoned. In general, most would have to go and the unlucky ones would end up oversees in Western Sahara.
The name Quintos comes from 1/5. Spanish Kings in the 15th century ordered that one-fifth of all men "Contribute Blood" by doing military service. They did not beat around the bush when they gave it that name...
Los Quintos have changed in name and form in modern times. Now it is often written with a K as Kintos (Email and SMS texting's influence on Spanish spelling). There is also the politicaly correct female version with an A = Kintas.
Spain has adopted a volunteer army, much like the United Statesian Army system. But the "comming of age" celebrations continue. 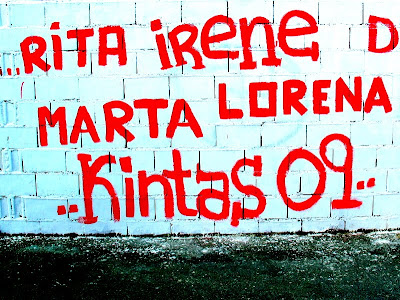 The big hand-over ceremony is a bonfire on the New Years Eve where everyone gets drunk. I am 18! Now I can get smashed!
There are many roles the Quintos play throughout the year during the many micro and macro festivals, but one in particular was a bit shocking:
Until only a few years ago, the Quintos played a gruesome role in the Carnival celebrations in February. They used to hang a rope across the main plaza, attach chickens by their feet so the head and body would hang down. Then the Quintos would whack them to death like living piñatas until they were no longer. Some were bothered by the "tradition" and it was stopped.
The chickens were then eaten as part of the festivities. 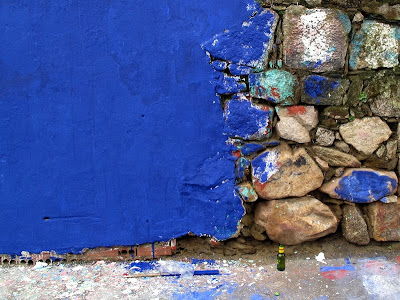 Fresly painted and waiting for the new generation of 2010
Now the Quintos can focus on drinking, and selling cheap drinks to raise money to have more parties to get drunk again.
The United Statesian
PS An even more gruesome tradition in another Spanish village has been put to a stop as well. The Quintos used to throw a live goat off the top of the church tower. BBQ goat meat was always on the menu.
Publicado por D. Troy Roach en 5:48 PM 1 comment:

The Three Kings vs Santa Claus... and Baby Jesus in the middle 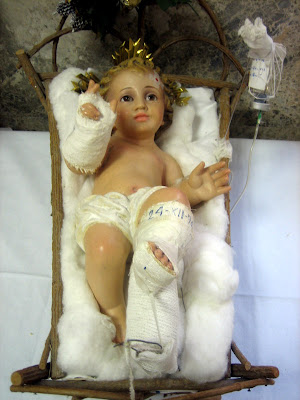 Baby Jesus has a booboo... or in Spanish....Tiene pupa!
Dear Citizens of the world,
This Baby Jesus or Niño Jesús– pronounced /NEENyo HayZUS/ in Spanish – is a traditional part of Christmas decorations in Spain, but with a makeover. This photo is from a Spanish hospital that made Niño Jesús look more like the patients so that they would laugh a bit and relate better.
Although, you could say that the Niño Jesús got caught up in a fight between Santa and the Three Kings (Los Tres Reyes Magos). In Spain, the Three “Magic” Kings are the ones that have always brought the gifts to the good little boys and girls. Since they were the ones bringing gifts to Baby Jesus it only makes sense that they give to all children. 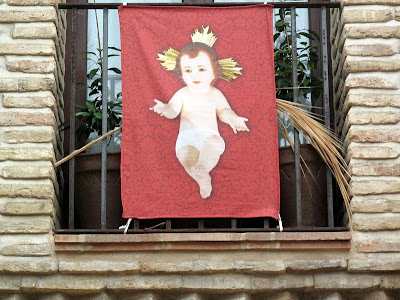 A more traditional look at the Niño Jesus.
Kings Day (Reyes) is on January 6th, which means that kids and teachers get an extra week off over the holidays. However, it also means that children didn't get their gifts until the 6th of January... after two weeks of vacation... and just before the return to normal.
Child: “Oh, what a wonderful gift! I am going to....”
Parents: “Not so fast... time for bed... you have school tomorrow!”
This technical problem was partly solved by importing Santa... Now parents can give the main gifts on the 24th or 25th of December. Children can then play with their toys during the long Winter break. Later, on kings day more gifts come. Some kids only get one set of gifts, but most seem to get two sets now. 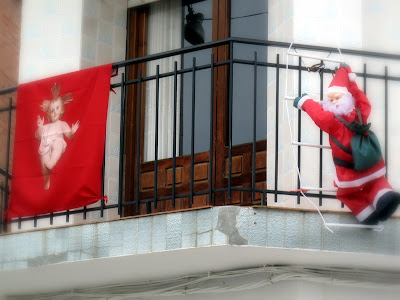 Niño Jesús unwittingly is about to be hijacked by a "thief" version of Santa.
And Niño Jesús? He's laid up in the hospital, wondering what hit'm.
Merry Christmas and Happy New Year!
The United Statesian
Publicado por D. Troy Roach en 11:44 PM 3 comments: 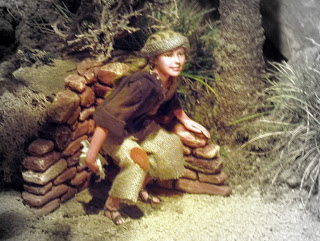 Dear Citizens of the world,
After finding this figure in a large nativity scene (Belen in Spanish) in a small church in the Pyrenees. I immediately decided to find out more and write a blog. The cagón could be translated as the pooper, crapper or sh!tter. I will use the translation of "pooper" for this post.
This image was shocking to me because I am used to the traditional scene of the happy family, three kings, angels, some farm animals, etc. 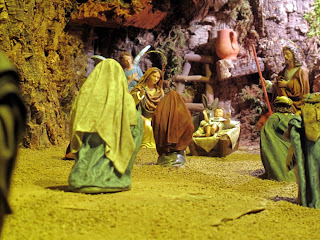 Apparently, the tradition of the Nativity Pooper comes from the Catalan region of Spain. The Catalan name is "Cagagner" (click for orignal source in Spanish). The Pooper is a symbol of good luck and prosperity:
Poop = fertilizer = a good harvest = prosperity = happiness
The pooper also gives a more "real" feel to the scenes. These nativities in Spain are huge. They cover several square meters with tons of bark, sand, dirt... and figures that include the poopers. 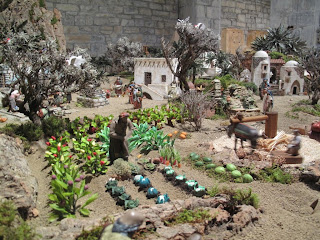 The nativity scenes even include mechanized figures and lighting to show day and night. The Pooper at the top has a mechanised arm with toilet paper doing a continuous wiping action. 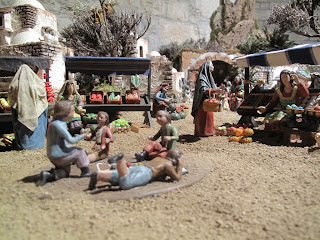 There are poopers with a likeness of famous people - even Obama! Does your nativity scene include an Obama pooper? It doesn't? ... well then I guess that it is not complete!
The United Statesian
Publicado por D. Troy Roach en 10:36 AM 2 comments: